* 10 nights hotel accommodation with half board

After breakfast we will start travelling to Fes via Meknes and Volubilis. In Meknes, another significant imperial city in Morocco, known as the Ismaili capital of Morocco, you will see the famous gate Bab Mansour, the Sahrij Souani Bassin, and the Mulay Ismail Mausoleum. After lunch, your journey continues to the Roman city of Volubilis, where you will get a chance to see the wonderfully preserved original mosaics, Roman road, and city layout. As you travel through the Moroccan countryside we will pass by the Holy City of Moulay Idriss for a photo opportunity. You’ll get to Fes late in the afternoon where we will spend the night.

After breakfast we depart to the south of Morocco. You will have a stop in Ifrane, known as the switezland of Morocco to enjoy its beauty and to have a memoriable photos. After that you will head toward Azrou to see the monkies in the cedar forest. Continuing to Midelt for a lunch meal in a restaurant. In the afternoon, we will cross the pass of Tizi N Talgghamt to reach Errachidia while admiring the views of Ziz gorges. Later on, you will have a stop for a panoramic view of Ziz valley. The drive continues to Erg Chebbi Dunes passing by Aoufous and Erfoud (the last is famous with fossils and dates) where you may want to visit a local fossil craft workshop. After that you will continue to the captivating dunes of Erg Chebbi, these dunes are called also Merzouga Dunes. Arrive to the hotel where you will spend the night. Dinner and breakfast in the hotel.

This morning after breakfast in the hotel. You will have a tour of the dunes on 4×4 allowing you to visit a nomad family living in tent, visit to khamlia village and entertainment of their spiritual music of Gnawa, and visit the lake Dayte Sarji that forms in springtime which attract pink flamingos and wildlife. Then you will have a break for lunch in Merzouga. After lunch you will see the canal irrigation system and have a walk on the oasis located on the foot of the dunes. Continue to your hotel for relax. Arrive to the hotel and get ready for a camel trek for 1,30 to enjoy the sunset. While on the back of your dromedary, you will continue to the camp for an overnight in traditional nomad tent.  Dinner and spend the night in a bivouac in the middle of the dunes.

Wake up early morning to enjoy the sunrise on the top of the dunes in the Sahara Desert then have your breakfast. After these beautiful moments, you will ride your camel back to the hotel where you can shower. We depart towards Tineghir passing by Erfoud and Tinejdad. Have a break for lunch. In the afternoon, we will continue to Todra gorges via Tineghir. Stopping along the way for photos and admiring the views. Arrival to Todra Gorges to enjoy its marvelous Canyons views while hiking on foot. Later on, we drive to Boumalne du dades and stopping for a panoramic view of dades valley. Dinner and overnight at the hotel.

After breakfast in the hotel, We depart to Ouarzazate via Boutghrar, Kalaa M’gouna and Skoura, visit the dades gorges with its beautiful rock formations. Later on, take the piste that leads to nomad families living in caves. Have a break to visit a nomad family and have a cup of tea in their shelter. Later on we cross the piste and drive along valley of roses to reach Kalaa M’gouna where you will enjoy your lunch. In the afternoon, we drive to skoura and visit the 17th century Kasbah of Amridil. The journey ends in Ouarzazate where we will overnight.

After breakfast in the hotel. You will have time to visit the kasbah of Taourirt then another photo stop near the atlas film studios. After that you will visit the Kasbah of Ait Benhaddou and stop for lunch in a local restaurant in the village. In the Afternoon we will drive to the kasbah of Telouet and stop for a visit then we continue to the red city of Marrakech over the mountains of high Atlas passing through the Tizi N’tichka pass (2260 m). Late in the afternoon we arrive to Marrakech where we will spend the night.

A full-day tour of Marrakech. We will visit the Menara, a surrounded pool by flowerbeds that function as an irrigation system for the surrounded fields. The sightseeing tour will cover several impressive sights: The Koutoubia mosque, Majorelle Gardens, Bahia Palace and Dar Si Said Palace museum of jewellery. Optional lunch will be in the Medina followed by a walk through the colorful souks of Marrakech. We will enjoy a sunset drink overlooking the exciting Djemaa El Fna Square from a terrace of a cafe, dinner and night at hotel.

After breakfast, departure to Essaouira. Upon arrival, lunch fish. In the afternoon, city tour and alleys of the medina of Essaouira, a former Portuguese fort known for its handicrafts, silver jewelry and inlaid wood of Thuja. Dinner and overnight.

Breakfast and departure to Casablanca via El Jadida with lunch at El Oualidia (can eat the fish specialties). Continuation to El Jadida along the Atlantic coast. Arrival in Casablanca where we will spend the night.

After breaKfast, we will drive you to Casablanca airport where the tour ends.

* 10 nights hotel accommodation with half board 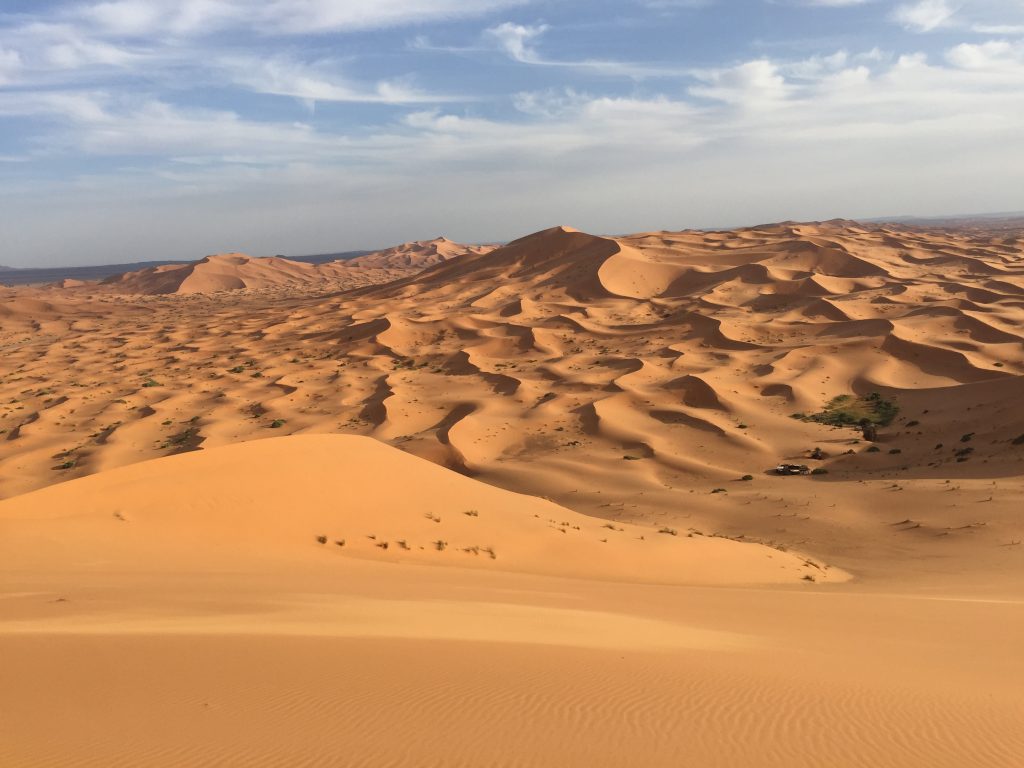 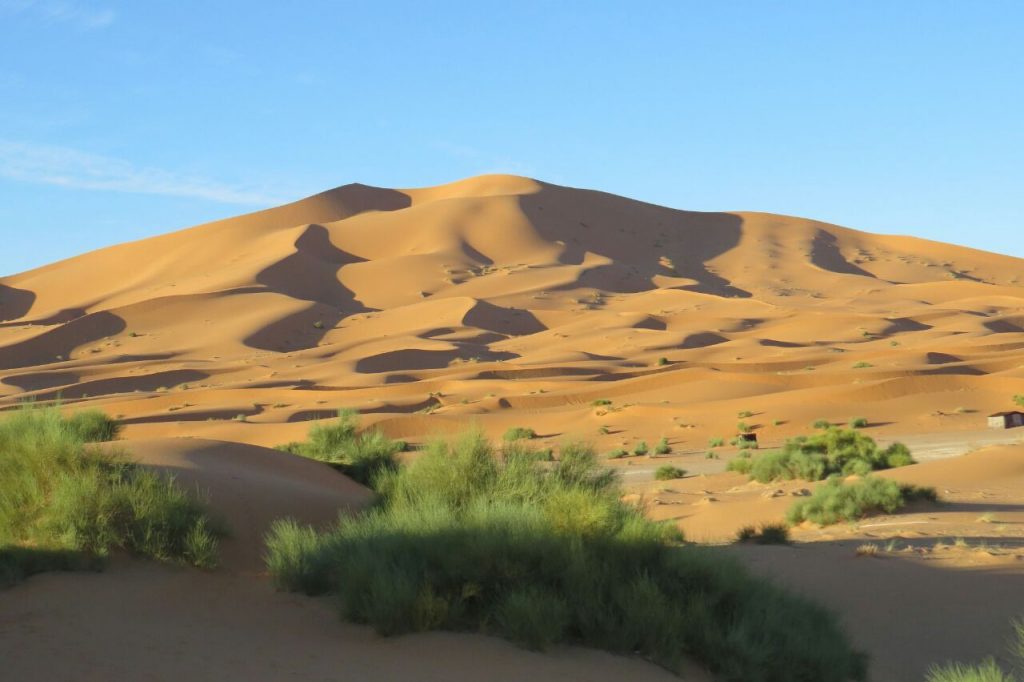 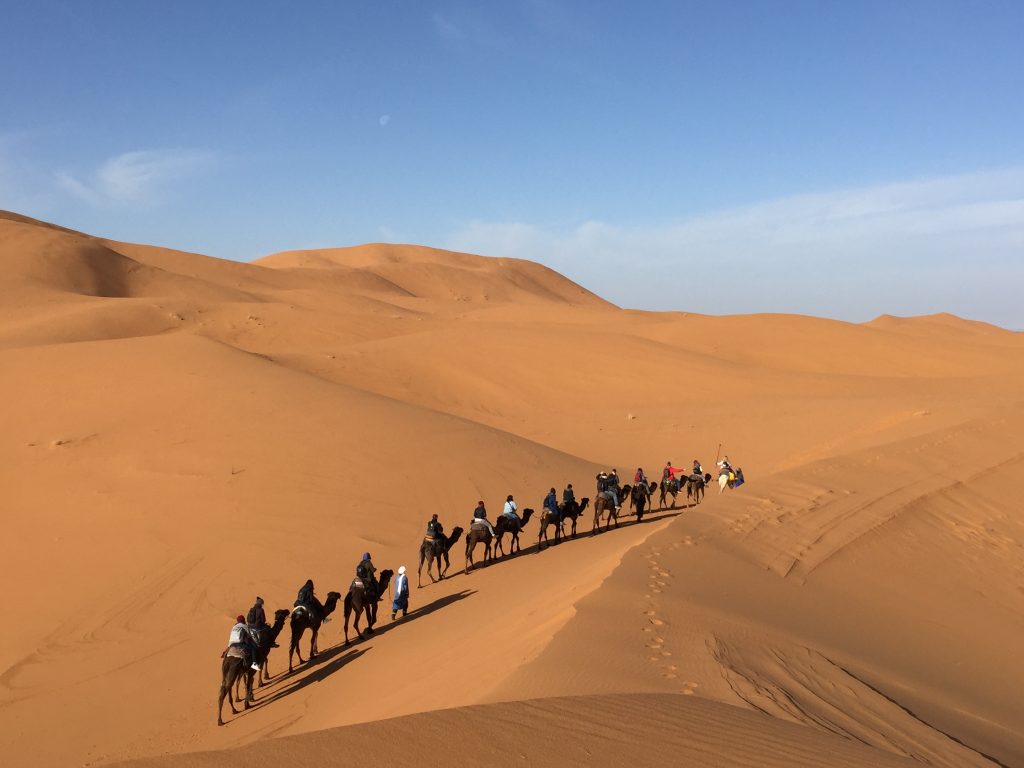