Casablanca is the largest, and probably best known, city in Morocco. Located on the Atlantic coast, it is the economic capital of Morocco. discovery city for the reason that we offer many tours from Casablanca.

The centre of business and industry, because , it has the country’s principal port, and its largest international airport.

The old and the new coexist from the original, wall medina to the modern Hassan II Mosque, one of the largest mosques in the world.

In the early 15th century, the town became an independent state once again, and emerged as a safe harbour for pirates and privateers.

leading to it being targeted by the Portuguese, who bombarded the town which led to its destruction in 1468.

The Portuguese used the ruins of Anfa to build a military fortress in 1515. The town that grew up around it was called Casa Branca, meaning “white house” in Portuguese.

so Casablanca and all other areas occupied by the Portuguese were under Spanish control, though maintaining an autonomous Portuguese administration.

As Portugal broke ties with Spain in 1640, Casablanca came under fully Portuguese control once again

The historical context of the mosque began with the death of King Mohammed V in 1961.

King Hassan II had requested for the best of the country’s artisans to come forward and submit plans for a mausoleum to honour the departed king;

it should “reflect the fervor and veneration with which this illustrious man was regarded.

also The building was commissioned by King Hassan II to be the most ambitious structure ever built in Morocco.

Finally the work commenced on July 12, 1986, and was conducted over a seven-year period.

Construction was scheduled to be completed in 1989 ready for Hassan II’s 60th birthday.

During the most intense period of construction, 1400 men worked during the day and another 1100 during the night 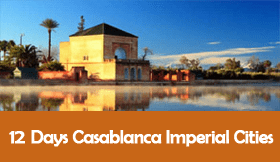